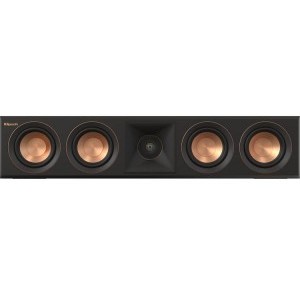 x
Add a Speaker for comparison

RP-404C II is a 2-way Passive Acoustic Suspension Center Channel speaker by Klipsch. Center channel speaker is an important component of a home theater system set-up as it delivers the listener significant part of the on-screen dialogue from your television. It features a 1" Tractrix Horn Tweeter and 4 x 4" Cerametallic cone Woofer. The speaker has a frequency range of 87-25k Hz and a sensitivity of 94 dB. Klipsch RP-404C II has an MSRP of 1198$ per pair.

Klipsch replaced the older RP-404C with this model. Follow the link to read our detailed comparison of these models:
Compare Klipsch RP-404C II vs Klipsch RP-404C

RP-404C II is a member of Klipsch's Reference Premiere (RP) II series of Passive speakers. Below you can see the main specs of these speakers.

Klipsch Reference Premiere (RP) II Series Speakers
**This post contains affiliate links and I will be compensated if you make a purchase after clicking through my links. As an Amazon Associate I earn from qualifying purchases.

Klipsch RP-404C II has a Frequency response range of 87-25k Hz at ±3dB and Power Range of up to 125 watts. At a minimum frequency of 87 Hz, it is hard to expect a strong bass response from RP-404C II so depending on your intended use, using a subwoofer will significantly help to widen the response range.

Visit our Powered Subwoofers section to find a subwoofer to find out more about the available options.

Among the speakers in our database with a max MSRP price of 1500$ (Pair), these are the 5 Passive Center Channel speakers that have the deeper bass levels than the Klipsch RP-404C II's 87Hz:


What is the Crossover frequency of Klipsch RP-404C II?

Is the Klipsch Reference Premiere RP-404C II an easy to drive speaker?

Base Surface Area and Volume
Base surface area of a loudspeaker may become a determining factor when the space in your room or desk is limited. The base area of Klipsch RP-404C II is approximately 1133.8cm2 / 175.7inch2.

To have a better perspective on the real life size of Klipsch RP-404C II, let's compare it with a standard size Compact Disc which has a diameter of 4.7inch (120mm).

Klipsch RP-404C II comes with Cork pads which you can use to secure your loudspeaker on the surface that you are putting on. It is always recommended to use some kind of feet under all types of speakers. Besides limiting the movement of the speakers, it also compensates for non-flat surfaces and limits the contact surface area of the speaker. Rubber based feet also help isolating the vibrations within certain frequency ranges.

RP-404C II comes with magnetic grilles in black color choices. The purpose of the grille is to protect the delicate driver elements from external impacts while still allowing the sound pass as clearly as possible.Since the included grille of the RP-404C II magnetic type, it is very easy to put it on and off.

Here are the items that are included inside the box of RP-404C II:

For more information about how to setup, use and maintain the Klipsch Reference Premiere RP-404C II, use the direct link below to download the official manual document:
Download User Manual for Klipsch RP-404C II

5 Years of parts warranty and 5 Years of labor warranty is generally provided by the manufacturer.